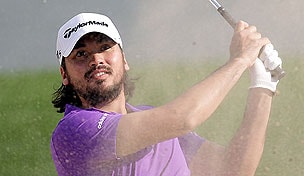 ABU DHABI – “What are you doing here?” Jason Day asked your scribe before sunrise on Thursday at Abu Dhabi Golf Club. “GTC” could ask the young Australian the same thing.

Day has been at home in Ohio with his wife Ellie, who is pregnant with the couple’s first child, since the Chevron World Challenge and, as has become custom on the PGA Tour, let his grooming habits slip and showed up at the Abu Dhabi HSBC Golf Championship with a beard.

Day is scheduled to play next week’s Qatar Masters and will begin his PGA Tour season at the Northern Trust Open in February followed by the WGC-Accenture Match Play Championship.

The bigger scheduling issue will come later in the year. Ellie Day, who told Jason she was pregnant during the third round of last year’s Australian Open, is due the week of the British Open in July.