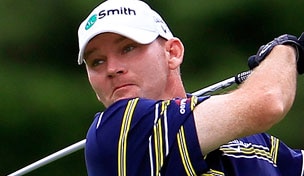 SEA ISLAND, Ga. – One year later, Tommy Gainey still looks back on his life-changing round with a certain amount of disbelief.

“I don’t know what to say … it was just a special round,” Gainey said Wednesday as he prepares to defend his title this week at The McGladrey Classic. “I mean rounds like that, they don’t happen every day.”

The round in question came on the final day of competition last year at Sea Island, with Gainey seven shots off the lead through 54 holes. After a 10-under 60 in the final round – which served as the lowest score of the day by three shots – the 38-year-old raced past the field to claim his maiden PGA Tour title.

“That’s a round that it’s hard to shoot. I mean, you’re not thinking,” explained Gainey, who won last year by one shot over David Toms. “I didn’t know I was putting for 59. I was just trying to make birdie on the last hole, and whatever it was, it was.”

Since his breakthrough triumph, though, Gainey has struggled to rekindle the form that propelled him to victory here a year ago. The early part of his 2013 season included a stretch of nine missed cuts in 10 starts, and the South Carolina native has missed the cut in each of his first two starts during the 2013-14 wraparound season.

“Haven’t made many putts so far. It’s all about making putts,” noted Gainey, whose only top-10 last season came at the winners-only Hyundai Tournament of Champions, where he tied for sixth. “If you make putts, you’re going to be in the mix. If you don’t make putts, then either you’re going to miss cuts by one shot or you’re going to finish around 40th place every week.”

With winds continuing to whip across the Seaside Course thus far this week, Gainey has already dismissed the notion of replicating last year’s ultra-low round.