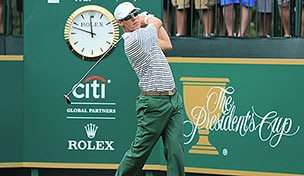 DUBLIN, Ohio – Canadian Graham DeLaet did his best Rory McIlroy impersonation on Thursday at the Presidents Cup, teaming with Australia’s Jason Day to put the International team’s first point on the board. Before that, he slept through his alarm clock.

The only thing missing was a police escort to Muirfield Village, like the one McIlroy needed at last year’s Ryder Cup after a tee time snafu nearly cost the Ulsterman at Medinah.

Luckily for DeLaet, his internal clock woke him up with plenty of time to spare.

Actually, it was DeLaet’s wife’s alarm on her phone that failed, but the Canadian still had plenty of time to make his 11:44 a.m. tee time.