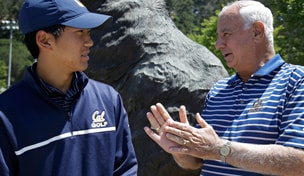 WINDERMERE, Fla. – And so ends a dizzying 2013 for Steve Desimone.

From helping guide Cal to arguably the best college season in history, to the disappointment of losing in the NCAA semifinals, to all of the award banquets and the recruiting and the Walker Cup and then the start of the 2013-14 season, yeah, it’s been an exhausting year for the Golden Bears coach.

Of course, such are the demands of leading a successful program, and Desimone certainly has that at Cal.

After winning 11 of 13 events in 2012-13 – alas, not the Big One, the NCAA Championship – the Golden Bears returned four starters from a year ago and virtually picked up where they left off. They were fourth at the Gopher Invitational – where they were without two of their best players, Michael Weaver and Michael Kim, who were competing in the Walker Cup – and then reeled off wins at the St. Mary’s Invitational, Jack Nicklaus Invitational and Alister MacKenzie Invitational.

Their average margin of victory during that stretch: 23.6 strokes.

But earlier this week at the Isleworth Collegiate, against the second-best field of the season, Cal finished third and a distant 21 shots behind No. 1-ranked Alabama. It left a sour taste going into the winter break.

“We can’t get focused on comparing it every step of the way to last year,” said Weaver, a senior. “That’s probably an unfair comparison. That was pretty special what we did last year. It wasn’t just that we won, but how well everyone played.

Weaver is key to the Golden Bears’ continued success, as is Brandon Hagy, who has taken his game to the next level in his final season at Berkeley. In five starts he hasn’t finished worse than eighth, including a victory at the Jack Nicklaus Invitational.

Still without a victory this season, however, is Kim, who has three top-20 finishes but has yet to display the kind of form that propelled him to Player of the Year honors a year ago. Fatigue has likely played a factor.

“He’s been a little uneven and not the same player we’ve seen,” Desimone said, “but he’ll come back strong in the spring.”

Pace Johnson has also been a solid addition to the lineup, helping to fill the void left by 2013 NCAA champ Max Homa, who is now trying to find his way on the PGA Tour. Johnson has top-16 finishes in four of his five starts, while Shotaro Ban and Keelan Kilpatrick make qualifying more competitive as they’re vying for their chance to crack the starting five.

“This one is definitely deeper,” Desimone said, when asked to compare this team with the 2012-13 squad, “and it has a chance to be even better.”