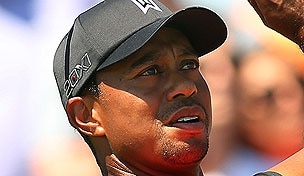 With four birdies in his last six holes, Tiger Woods mounted a charge late Sunday at the Turkish Airlines Open. But it wasn't enough for the win; instead, his 5-under 67 in the final round resulted in a T-3 finish alongside Justin Rose, four off the pace of eventual winner Victor Dubuisson.

The 23-year-old Dubuisson stayed steady throughout the Turkey finale, posting a 3-under 69 that proved impossible to catch.

His bogeys came at Nos. 7 and 11. At seven, Woods had a simple chip that he mis-hit and sent off the other side of the green. On the par-5 11th, Woods missed the fairway left off the tee, hit 3-wood left of the green, hit a poor chip to 40 feet and three-putted.