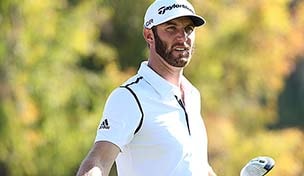 LOS ANGELES – Dustin Johnson bombed his driver around Riviera Country Club Thursday while racing to the first-round lead in the morning wave at the Northern Trust Open.

Johnson, bidding for his second victory of the season, opened with a 5-under-par 66.

Johnson couldn’t hit driver everywhere on this classic layout, but when he could, he went deep.

Johnson hit a 349-yard bomb at the 13th, leaving him just 94 yards and setting up one of his six birdies. He hit eight drives of more than 300 yards, five drives of 320 yards or more.

With Riviera maintenance crews rolling the fairways as well as the greens, and with the rough cut down, the course was especially firm and fast. Johnson took advantage by keeping his monster drives in play.

“I've been playing pretty good all year, so the game's right where I want it to be,” Johnson said. “Coming off a good week last week, I'm definitely feeling good coming in this week.”