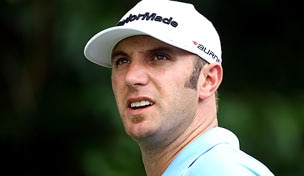 Getty Images
SINGAPORE - FEBRUARY 27: Momoko Ueda of Japan during the third round of the HSBC Women's Champions at the Tanah Merah Country Club on February 27, 2010 in Singapore. (Photo by Ross Kinnaird/Getty Images)  -

Dustin Johnson has moved up the start to his 2012 PGA Tour season by a week, committing to the Humana Challenge on Friday ahead of the deadline.

Johnson had said this week on his Twitter account that he would begin the year at the Farmers Insurance Open, the week after the former Hope.

“We’re delighted Dustin has elected to launch his 2012 schedule at the Humana Challenge,” said tournament chairman Larry Thiel, according to the Desert Sun. “Dustin is one of the outstanding young players on the PGA Tour.”

The world No. 8 underwent arthroscopic knee surgery on Nov. 29, shortly after playing on the victorious American team in the Presidents Cup. Johnson withdrew from the Chevron World Challenge to have the procedure done.

The five-time PGA Tour winner is now the highest-ranked player in the field, joining Phil Mickelson, Greg Norman, Matt Kuchar and FedEx Cup champion Bill Haas. It will be his third appearance in the tournament, having finished 12th in his rookie year in 2008 and 66th in '09.