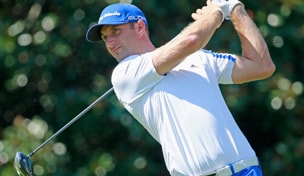 ATLANTA – Dustin Johnson rallied with a third-round 67 on Saturday at the Tour Championship to move into position to claim the rare “bookend slam,” victories at the year’s first and last events. He also clarified who is monitoring his golf swing.

Reports surfaced two weeks ago that Johnson had started working with Allen Terrell, his golf coach at Coastal Carolina and his swing coach early in his professional career, after a successful run with Butch Harmon, but Johnson was spotted working with Harmon this week at East Lake.

When asked about the move following Saturday’s round, which left Johnson alone in second place, four strokes behind frontrunner Henrik Stenson, he confirmed he is still working Harmon and his son Claude.

“Allen is going to help me with my golf school in Myrtle Beach (S.C.),” said Johnson, who is vying for his second victory of 2013 following his win to start the season in Hawaii.