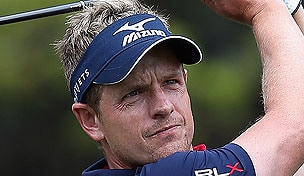 A winner earlier this year on the European Tour, Joost Luiten had a brief stay at the BMW Masters, withdrawing immediately after striking his opening tee shot Thursday.

According to former world No. 1 Luke Donald, who was paired with Luiten in Thursday's opening round, the withdrawal speaks less to the Dutchman in particular and more to the issues plaguing the inaugural Final Series for the Race to Dubai.

The BMW Masters is the first of three Final Series events leading up to the season-ending DP World Tour Championship next month in Dubai; in order to qualify for the season finale, the European Tour dictates that players must participate in at least two of the three events preceding it. With one of those events, the WGC-HSBC Champions, boasting an already limited field, many players are forced to play both this week and in two weeks' time at the Turkish Airlines Open to remain eligible for Dubai.

For Luiten, who won the KLM Open last month in his native Netherlands, the event does count as an official start despite the withdrawal because he opted to hit his opening tee shot. Had he withdrawn prior to the start of the event, though, first alternate Justin Walters would have received a spot in the field. Instead, Walters was left without a tee time, as no other players pulled out of the tournament before the start of play.

The situation drew the ire of Donald, who took to Twitter following his opening 3-over 75 to voice his displeasure:

New Euro Tour rule this year states that you have to play at least 2 out 3 events before Race to Dubai to be eligible....

.....if that rule wasn't in affect then Joost would have withdrawn prior to event and 1st reserve would have got to play this weeks event!