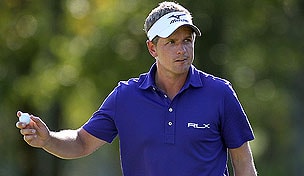 Getty Images
MARANA, AZ - FEBRUARY 24: Padraig Harrington of Ireland waits on the practice ground during a practice round prior to the start of the Accenture Match Play Championship at the Ritz-Carlton Golf Club at Dove Mountain on February 24, 2009 in Marana, Arizona. (Photo by Scott Halleran/Getty Images)  -

With his third-place finish at the Dubai World Championship, Luke Donald assured his spot atop the Official World Golf Ranking heading into 2012.

The world No. 1 carries a 2.29-point lead over Rory McIlroy after the European Tour's season finale.

The top 4 in the rankings remain unchanged, but Adam Scott and Steve Stricker swapped places. The Aussie is now the fifth-ranked player in the world, with Stricker remaining the top American in sixth.

Four Americans populate the top 10, but Phil Mickelson dropped two spots down to 14th - his lowest ranking since Jan. 2004.

Dubai World Championship winner Alvaro Quiros is assured a spot in the Masters as he moved from No. 52 to No. 21 with his second 2011 win in the emirate. The top 50 players on Dec. 31 are offered an invitation to Augusta National. Ryo Ishikawa is No. 50 this week, with the Japanese season complete.

Off until the Abu Dhabi HSBC Championship in January, Tiger Woods dropped a spot to No. 22.