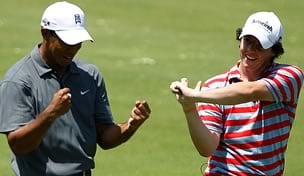 Luke Donald wants to clarify: Rory is a natural, but Tiger is the greatest he has ever seen.

At the Dubai World Championship on Wednesday, Donald said he believed the U.S. Open champion has more talent than the 14-time major winner.

'I know Tiger is very, very close and obviously I think Tiger's work ethic has always been tremendous, and his mindset, as well,' Donald said. 'I think his mindset is what has separated himself from the field when he was really at the top of the game. But in terms of talent, I think Rory has more talent.'

He added, 'I've always said, 'I think of the guys I've played out here on Tour, Rory has the most talent that I've ever played with.''

The world No. 1 took to Twitter to explain his definition of 'talent.'

'A few people aren't understanding what I meant,' he tweeted. 'The word 'talent' and Rory to me means a free-flowing swing who makes everything look so easy. TW (Tiger) has always been the best at getting the ball in the hole when it mattered the most. That's not just talent, that(’s) something else too.'

Donald went on to make one more point about the Woods-McIlroy comparison.

'Talent can only take you so far; you need the right attitude (mindset) and application to perform at the highest level ... never try to disrespect Tiger in any way. He is still the greatest player I have played with.'