With plenty of awards, Donald eyes a major 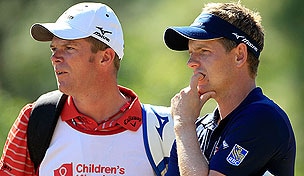 Despite pulling off the unprecedented feat of winning both the PGA Tour and European Tour money titles in 2011, Luke Donald knows his career will be viewed as incomplete without a major.

'I think there will always be a little bit of an asterisk against my name until I win one, but I'll be trying very hard to correct that (in 2012),' Donald said Monday after winning the PGA Tour Player of the Year award.

'Obviously something that is missing from my résumé is a major and something I'll continue to concentrate on trying to focus my efforts on, giving it my best shot.'

Donald’s trans-Atlantic feat – even without a major – was quite impressive.  He entered the PGA Tour's Disney event at the last minute to have a chance to catch, then pass Webb Simpson for the money lead. He finished third at the Dubai World Championship last week to secure his money double and his 19th top-10 finish in 27 worldwide starts this year.

Even during a remarkably consistent year, Donald said in June that his career will be viewed differently with a major title.

'Being ranked No. 1 is self-satisfactory in terms of you feel good about what you've done,' he said. 'Winning a major makes you seem more accepted as a great player from your peers.'