Don't expect Mickelson and Bradley to ask for rest 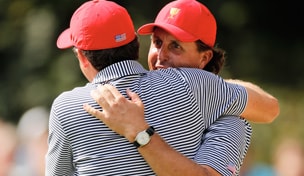 They’re now 4-1 as partners in Ryder Cup and Presidents Cup play and eager to extend their records in Saturday’s fourballs and foursomes at Muirfield Village Golf Club.

A year ago, Mickelson created some debate when he asked American Ryder Cup captain Davis Love III to rest he and Bradley in the Saturday afternoon fourballs session. They had won all of their first three matches together at Medinah.

When the Americans ended up losing after a Sunday singles collapse, Love was taken to task for not convincing Mickelson and Bradley to play that Saturday afternoon session. The same scenario shouldn't unfold in this Presidents Cup.

“I would anticipate playing both sessions tomorrow, given that only four people get to sit out, two in the morning and two in the afternoon,” Mickelson said. “I feel like Keegan and I have some pretty good energy and pretty good play right now, and I think we want to keep it going.”

Mickelson’s fitness for playing all the sessions again this year came into question after he struggled to get loose after Thursday’s rain delay. Mickelson and Bradley ended up losing their fourball match to Louis Oosthuizen and Charl Schwartzel.

“I went back out and hit balls and felt fabulous,” Mickelson said.

Mickelson was asked if he regrets asking to rest at last year’s Ryder Cup.