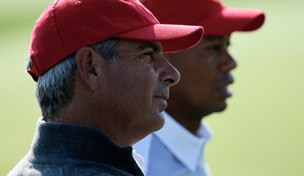 DUBLIN, Ohio – When it comes to potential pairings for this week’s Presidents Cup, don’t expect a reprise of the Tiger Woods-Phil Mickelson combination from the 2004 Ryder Cup.

“As far as Tiger goes, he's our No. 1 guy,” United States captain Fred Couples said. “All the other guys want to play with him. Well, Phil probably won't.”

And yes, he followed that line with a smile.

During a Tuesday morning news conference, Couples suggested that it shouldn’t be too difficult to figure out which players will be paired for the four team sessions.

“I have consistency in Steve Stricker, Phil Mickelson and Tiger, and pretty much whatever they say is going to happen,” he admitted. “They have been on 50 teams probably amongst the three of them. We do have Davis [Love III] and Jay [Haas] as assistants, but we go to those three guys and ask them what they think, and they know they are going to get more out of the players than probably Jay and I, because they are walking every shot with them today and tomorrow.

“Keegan [Bradley] and Phil are already a great team together. That worked out last year at The Ryder Cup. No one would have thought that. But they make a good team and that's kind of how it works, just like Stricker and Tiger did a few years ago.”

As for the International team, captain Nick Price said his team members helped the pairing process.

“They were pretty sure about who they wanted to play with, which made my job a lot easier,” he said. “Obviously with the six South Africans, that was easy, because a lot of them had played amateur golf together and had played alternate-shot in some fourball golf over the years.”

Price also maintained that some of his more inexperienced players could be paired with a veteran to help provide some stability.

“Brendon De Jonge obviously has not played a whole lot of golf with everyone. I put him out there with Ernie [Els] today, because I think that Ernie's a wonderful calming influence and Brendon, he and Marc [Leishman] maybe with the picks, a little nervous and apprehensive so my thinking was putting them with some of the more experienced guys.”