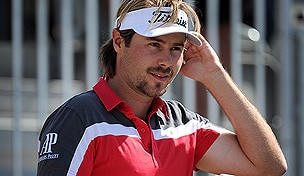 MARANA, Ariz. – Depending on how things go on Sunday at Dove Mountain, U.S. fans may be seeing more of Victor Dubuisson in the coming months.

In three PGA Tour starts this season, Dubuisson has made three cuts and finished tied for 13th at the AT&T Pebble Beach National Pro-Am. If the Frenchman finishes no lower than third at the WGC-Accenture Match Play Championship – which would be a victory in Sunday’s consolation match – he will have earned enough FedEx Cup points to claim special temporary status.

According to Tour regulations, Dubuisson would have 60 days to claim his special status and with it the ability to accept unlimited sponsor exemptions with an eye toward securing a full Tour card.

Dubuisson is scheduled to play the WGC-Cadillac Championship in two weeks and according to his manager might add more U.S. stops depending on how Sunday goes.

“I’ve been dreaming about (joining the Tour),” he said. “Now I know I can get my card with the points I made this week and at the AT&T. So I would have to think about it because I would really love to play here full time. I will see how I will manage this next year.”