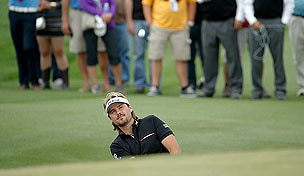 Getty Images
SHANGHAI, CHINA - NOVEMBER 06: Erica Stoll follows the play of Rory McIlroy of Northern Ireland during the second round of the WGC - HSBC Champions at the Sheshan International Golf Club on November 6, 2015 in Shanghai, China. (Photo by Scott Halleran/Getty Images)  -

MARANA, Ariz. – Victor Dubuisson – who grew up in Cannes and now lives in Andorra, a tax haven between France and Spain – looked more Spanish than French during his pitched final match on Sunday at the WGC-Accenture Match Play Championship.

In order, Dubuisson scrambled for par from the front bunker at the 18th hole in his match against Jason Day to extend the championship match and followed with arguably two of the best shots in Match Play history.

After his 9-iron approach at the 19th hole sailed through the green and settled next to a jumping cholla, Dubuisson gouged his chip out of the desert to within 4 feet and saved par to extend the match.

At the next hole (the par-4 ninth), his approach again found the desert and he punched his next shot to 7 feet, again saved par and a half.

In true style, when asked if he considered taking unplayable lies with either shot Dubuisson didn’t hesitate, “No . . . no, no, no.”

For Day, who won the match and his second PGA Tour title on the 23rd hole with a birdie, it was a difficult one-two punch to endure.

“I kept shaking my head because there were a couple of times today when I thought he was dead,” Day said. “When we walked off the green (on the 19th hole) he looked at me and said, ‘sorry.’”

The performance also caught the attention of U.S. Ryder Cup captain Tom Watson, who will have to find an answer for Dubuisson later this year in Scotland when he is sure to play for the European side.

“Two of the greatest up and downs I have ever seen Victor,” Watson tweeted. 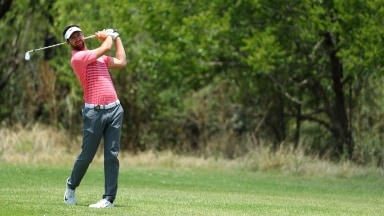 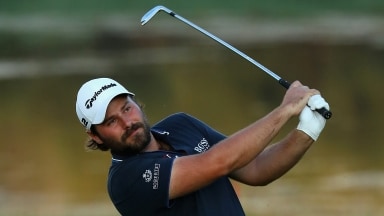 Victor Dubuisson came through a day of strong winds and thunderstorms at Sun City to hold a two-shot lead after two rounds of the Nedbank Golf Challenge on Friday. 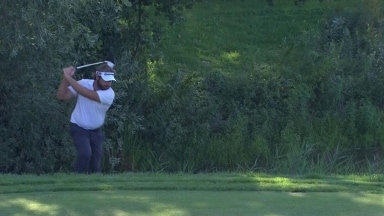 Victor Dubuisson was 3 down on the par-5 12th at the Paul Lawrie Match Play, when he hit a poor third shot from a tough spot and then fired his club in anger.