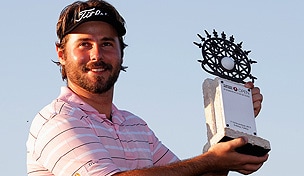 Topping a field that includes Tiger Woods, Henrik Stenson and Justin Rose apparently can do wonders for your world ranking.

Victor Dubuisson, the surprise winner at the European Tour’s Turkish Airlines Open, jumped all the way from No. 108 to No. 39 in the latest rankings, released Monday. It was just his third top 10 in his last 13 worldwide starts.

Nonetheless, the Final Series victory vaulted Dubuisson into rarefied air, as he became the highest-ranked Frenchman in the history of the OWGR, beating the mark previously set by Thomas Levet (41).

At No. 39, Dubuisson is now just a spot behind Billy Horschel and ranked ahead of such players as Kevin Streelman, Jimmy Walker, Gary Woodland and McGladrey Classic winner Chris Kirk, whose second career PGA Tour title moved him from 93rd to a career-best 56th. In other words, first-time winner Dubuisson is now in pretty elite company.

World No. 2 Adam Scott won the Australian PGA – his second title in his last five worldwide starts – but earned only 22 world-ranking points with the win. No. 1 Woods, meanwhile, earned 18.2 points for his T-3 finish in Turkey, meaning Scott was not able to make up much ground at the top of the rankings.