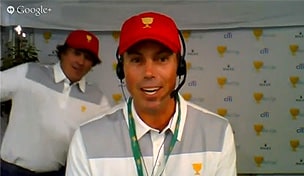 Jason Dufner won the PGA Championship earlier this year. What did he do? He slowly and methodically lifted his arms at a 90 degree angle and gave a slight fist pump. His face remained unfazed.

But what does Dufner do on a Tuesday at the Presidents Cup? He shows more energy and personality than we've perhaps ever seen.

While U.S. Presidents Cup teammate Matt Kuchar was doing a Google+ hangout with the PGA Tour, Dufner did a little dance in the background. ... And then he did it again. See his moves in the video below (fast-forward to the 3:25 mark):