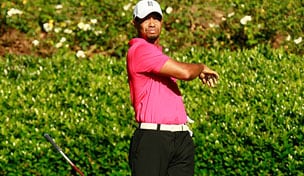 Players will swing the virtual golf club in a new way with the ability to control tempo, swing plane and shot power. In addition, players can adjust their setup at address to create the full litany of possible golf shots.

“Our fans asked us to deliver a new level of fidelity and authenticity to Tiger Woods PGA Tour ‘13 and our team delivered with the ability to literally choose millions of shot combinations through our new swing mechanic,” said Mike Taramykin, vice president and general manager of Tiger Woods PGA Tour, in a release. “Fans will now be able to experience unparalleled control on the virtual golf course.”

On the Xbox 360 platform, Kinect users will be able to ditch the controller and swing with a natural motion. Kinect uses a series of cameras to track a player’s movement, translating them into action on the screen in the game being played. Players can navigate game menus with their voice or hand gestures.

PlayStation Move users will also be able to experience similar motion gaming on the PlayStation 3 system.

Online players will also be able to create virtual country clubs, facilitating competition with friends, and working collectively to unlock different aspects of the game.