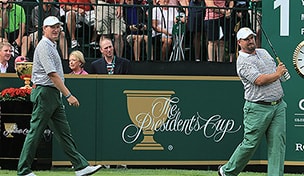 The Presidents Cup may need tweaking, but Ernie Els thinks the latest edition was the most competitive yet.

In a post on his personal website, Els said that he knew the International team was a heavy underdog but “we had a lot of fight in us the whole week.”

At Muirfield Village, Els teamed with Brendon De Jonge – with whom he was paired at the Deutsche Bank Championship – and posted a 2-2 record, winning both of their foursomes matches but dropping the two fourballs. Els also won his Sunday singles match over Steve Stricker, 1 up.

“Summing up I will say that in all my eight appearances in this competition, the level of play this year and the number of birdies made on both teams was outstanding, probably the best we’ve seen,” he wrote.

That apparently was the view shared by PGA Tour commissioner Tim Finchem, who said in the winner’s news conference afterward, “By every measure, this was the strongest Presidents Cup we’ve had.”