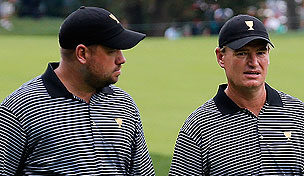 DUBLIN, Ohio – Brendon de Jonge was playfully wrestling with his children when he received the call from International captain Nick Price that he would be a member of this year’s Presidents Cup team.

On Friday he helped take down the U.S. duo of Bill Haas and Hunter Mahan, joining forces with Ernie Els to win 4 and 3 in their foursomes match.

“He’s just an unbelievable ball striker and a great guy with a great heart,” Els said of his partner.

Despite being a rookie on the team, de Jonge has outplayed his veteran teammate, carding eight birdies in a fourballs loss on Thursday, then doing most of the damage in their Friday victory.

Even so, de Jonge was more than happy to deflect the credit.

“I feel like I played nicely two days, but don’t let Ernie give me all the credit,” he said. “He is by far the most calming influence that I’ve ever been out on a golf course with. That was huge for me. It’s nice to play with Hall of Famer who hits in middle of fairways and greens.”