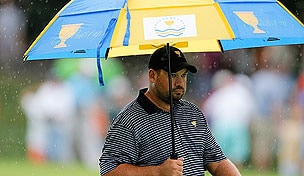 Getty Images
CRANS, SWITZERLAND - SEPTEMBER 07: Rory McIlroy of Northern Ireland celebrates holing a birdie putt on the 15th hole during the final round of the Omega European Masters at Crans-Sur-Sierre Golf Club on September 7, 2008 in Crans Montana, Switzerland. (Photo by Andrew Redington/Getty Images)  -

DUBLIN, Ohio – Ernie Els saw Brendon De Jonge’s best on the final day at last month’s Deutsche Bank Championship, a closing round of 66 that vaulted him into the Tour Championship field and likely this week’s Presidents Cup.

“He hit it as good there as he’s hit it here the last two days and he’s got the length,” said Els, who had never played with the Zimbabwean until the final day at TPC Boston. “I kind of quietly said to (International captain Nick Price) that we could be good together.”

That endorsement likely swayed Price to make de Jonge, who he has mentored, a captain’s pick, and the rookie has responded, helping Els to a 4-and-3 victory over Bill Haas and Hunter Mahan on a stormy Friday at Muirfield Village.

Even during the duo’s Day 1 defeat, de Jonge was solid when he was 2 under but lost to Steve Stricker and Jordan Spieth.

“He rubs off on you,” de Jonge said of Els. “When he said to me yesterday, ‘I hope you are as nervous as me,’ that put me at ease.”