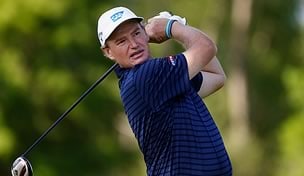 Ernie Els will tee it up at next week’s Scottish Open, after all.

The reigning British Open champion had originally planned to play the July 11-14 event but strongly hinted that he would withdraw after winning the BMW International Open last month. After that victory, the 28th of his European Tour career, Els said that he was looking forward to a “nice break coming up,” which included a trip last week to Muirfield for the first time since winning the Open there in 2002.

After more consideration, Els told The Scotsman on Monday that he “might need a little run before the Open” and that three weeks off was too long.

And now, on Tuesday, the Big Easy officially entered to play next week at Castle Stuart, where he will join the likes of Phil Mickelson, Padraig Harrington and Darren Clarke, among others.

“I have very fond memories of my two wins in the Scottish Open, and if I can win it a third time next week, it would be the perfect platform for my defense of the Open,” Els said in a release.