Cantlay capturing the moment at Travelers 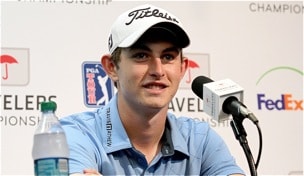 The past month of Patrick Cantlay’s life reads like a how-to book on becoming golf’s next big superstar.

In the final event of his freshman season at UCLA, he finished in second place at the NCAA Championship in Stillwater, Okla. …

… then two days later traveled to Columbus, Ohio, to pick up the Jack Nicklaus Award, given annually to the nation’s top collegiate player …

… and while he was in town, he also cruised through U.S. Open Sectional Qualifying …

… only to hop on a plane for Greenwich, Conn., later that day en route to helping lead the United States to a Palmer Cup victory …

… from which he went to Bethesda, Md., and not only made the cut at the U.S. Open, but finished as low amateur in a share of 21st place.

You could excuse the 19 year old if he had chosen to follow that journey with a week of sleeping ‘til noon and bumming around his folks’ place in California. Instead, he took a sponsor’s exemption into the Travelers Championship, where so far he’s topping all of those previous feats.

Following an opening-round 3-under 67, Cantlay fired a blistering 60 on Friday, just one stroke shy of tying the PGA Tour record shared by five players.

“I was just trying to stay in the moment,” he said afterward. “So as far as realizing what I was doing, I was just, you know, trying to make good swings and put a good stroke on every putt. I actually shot 60 maybe three, four months ago at my home course, Virginia Country Club in Long Beach. That was 11 under. No 59. Not yet.”

Almost, though. Needing to birdie three of his final four holes at TPC River Highlands, Cantlay carded pars on the 15th and 16th holes. He drilled a seven-foot birdie putt on 17, but an eagle on the long par-4 closing hole seemed unlikely. From 152 yards in the fairway, he simply drilled an approach to within 28 inches of the cup, giving him a tap-in for 60.

Instead, Cantlay was forced to settle for a four-stroke lead with half the field still yet to conclude the weather-delayed second round. He is attempting to become the fifth amateur to win a PGA Tour event and first since Phil Mickelson at the 1991 Northern Telecom Open. Three amateurs – Pablo Martin, Danny Lee and Shane Lowry – have won European Tour events since 2007 and already this season, Russell Henley has claimed a Nationwide Tour title.

Should he win this week, Cantlay’s first-place prize money will be awarded to the second-place finisher. Don’t expect him to be collecting any paychecks soon, either.

After the round, he reiterated his desire to remain at UCLA for three more years.

“I'm not thinking about that right now,” he said. “So I'm going to try and take care of business this week and then see what's going on. But I'm going to stay amateur definitely for the Walker Cup, and my plans are to stay amateur, you know, until I finish college.”

And if he falters on the weekend in Hartford and doesn’t remain atop the leaderboard? Well, there’s always next week.

On Friday, it was announced he was granted a sponsor’s exemption into the AT&T National, meaning Patrick Cantlay’s excellent adventure will only continue.