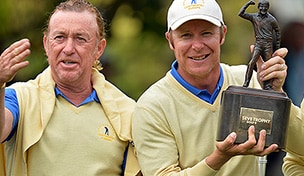 Getty Images
While in New York City, Win McMurry and the Gone With The Win crew head to Times Square.  -

The Presidents Cup isn’t the only team event with its fair share of critics.

Players are seemingly even more critical of the Seve Trophy, won last week by Continental Europe for the first time in 13 years.

The event featured small crowds and even less star power, as it was without many of the top U.S.-based players, who were (understandably) taking a few weeks off after the FedEx Cup and before the European Tour’s Final Series.

No matter. Gonzalo Fernandez-Castano told reporters last week that he believes the Seve Trophy should be “compulsory” to play in order to “protect the event’s future.”

“The Seve Trophy is fun and it’s about team spirit and match play,” the Spaniard said, according to several published reports. “That’s why I still can’t believe the better players on the European Tour were not here to support the event. I don’t know what we can do about it, but maybe it has to be compulsory to play. …

“I hope this tournament continues as the European Tour needs it. It’s because of this tournament that we are very successful in the Ryder Cup. … It’s not on the agenda (at the tournament players’ committee meeting this week in Portugal) but maybe someone will raise the issue in ‘other business’ as we need to do something to protect the event’s future.”

It’s not as simple as demanding that the big names play, though.

Here’s Thomas Bjorn, chairman of the Players Committee, who told reporters: “We must understand what those guys playing in the States go through. They come off a massive run in America and as long as tournaments come thick and fast, it’s going to be difficult for them. … I have sympathy for them.”