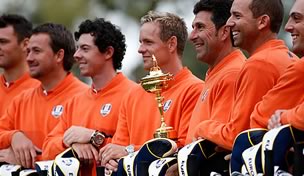 Maybe the Europeans are saving their best for the American Ryder Cup team again.

With the European Tour’s 2013 season winding to a close with just three events left on the schedule, it’s notable how Europe’s record-setting Ryder Cuppers have almost collectively swooned. The team that mounted the unforgettable Miracle at Medinah in coming back to defeat the Americans in Sunday singles a little more than a year ago hasn’t received the Ryder Cup bounce you might have expected this year. In fact, the team’s endured what’s more like a prolonged Ryder Cup hangover.

Just two of those 12 Euro Ryder Cuppers have won anything this year. Justin Rose, of course, won the U.S. Open and Graeme McDowell won two European Tour events and a PGA Tour event.

Just two of the 12 players on that European Ryder Cup roster have improved their world-ranking position since that Ryder Cup victory.

Derek Lawrenson of the Daily Mail in England outlined the puzzling slides in a story from the WGC-HSBC Champions this week.

“You would never have thought so many talented and experienced players would be winless at this point in the season,” McDowell was quoted saying in Lawrenson’s story. “It just shows how hard it is to win out here. You need everything going your way.”

Ian Poulter, such a force in that Ryder Cup comeback, is looking at only his third winless season in his 15 as a pro.

“I’m sure there is something in how much it takes out of you mentally that week,” Poulter said. “We’ve seen it in other sports, haven’t we, where a team or a player struggle in the months afterwards following such an amazing high.”

Notably, Euro Ryder Cuppers are lining up Sunday to try to come back on yet another American. Poulter, McDowell, McIlroy, Rose and Kaymer are all within four shots of Dustin Johnson going into the final round of the WGC-HSBC Champions.