Eventful round and week for McIlroy 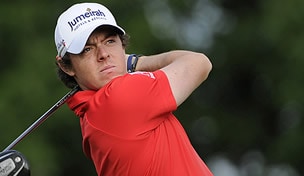 Getty Images
AKRON, OH - AUGUST 07: Soren Hansen of Denmark plays a shot on the 8th hole during the second round of the WGC-Bridgestone Invitational on the South Course at Firestone Country Club on August 7, 2009 in Akron, Ohio. (Photo by Sam Greenwood/Getty Images)  -

DUBLIN, Ohio – In honor of this week’s National Spelling Bee, Golf TalkCentral will accept E-V-E-N-T-F-U-L for the win, as in Rory McIlroy’s second round at the Memorial was eventful.

The Northern Irishman’s even-par 72 was anything but even, a card that included six birdies, four bogeys and a particularly sloppy double-bogey at Muirfield Village’s 14th hole that added up to a share of the early lead at 6 under on Friday.

But then McIlroy’s entire existence promises to be eventful for the next few weeks.

“If I can keep some of the silly bogeys off the card I’ll be OK,” said an upbeat McIlroy.

Yet even without a victory on Sunday in central Ohio McIlroy’s week will be anything but mundane. On Sunday night he plans to fly to Miami for a Monday morning hop to Haiti where he will be visiting a UNICEF complex in the devastated island nation.

“It will be a huge eye-opener for me because I don’t know what to expect,” McIlroy said. “You can’t prepare yourself for what people have gone through.”

McIlroy plans to spend two days in Haiti and is on anti-malaria medication as a precaution. “We took a couple early just to make sure he didn’t fall over mid-round,” said McIlroy’s manager with International Sports Management Stuart Cage.

After Haiti McIlroy plans to spend two days at Congressional to prepare for the U.S. Open before travelling to New York City for a corporate outing. According to Cage he will likely go to venerable Pine Valley Golf Club in New Jersey from there to rest and practice before the season’s second major.