Every honors Tebow in Patriots' country 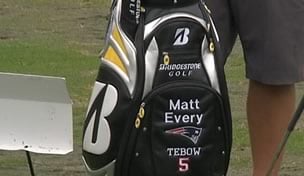 NORTON, Mass. – Matt Every is a Tim Tebow fan.

You don’t need to hear him talk about his fellow University of Florida alumnus to know that. It’s written on his golf bag.

Every recently put Tebow’s name and uniform No. 5 with a New England Patriots logo in the same spot where most PGA Tour players pay homage to a sponsor.

All of which could potentially lead to an awkward situation this weekend.

Competing in the Deutsche Bank Championship just a few miles from the Patriots home stadium in Foxboro, Every could find himself playing this weekend with a name on his bag attached to the logo of a team for which he no longer plays. That’s because Bill Belichick’s squad is expected to make another round of cuts on Friday and Tebow, who didn’t play in the team’s last preseason game, could be among those left without a job.

“I could care less,” Every said of that prospect. “I really don’t care.”

When asked if he thinks Tebow will earn a roster spot, he added, “I do think he will make the team, regardless of his performance. I think they need him on there. Not as a quarterback, just as a teammate.”

The genesis of Every placing the name of Tebow – whom he says he knows, but wouldn’t consider a friend – on his bag was a debate with other PGA Tour players.

“The whole argument started when the question was brought up: If you have a gun to your head and somebody had to win a football game for you – Tim Tebow or Tony Romo – who would you take?” explained Every, who said an early-first round tee time will prevent him from attending the Patriots final preseason game on Thursday night. “Everyone thinks it’s an automatic Tony Romo, but we’re not talking about fantasy football here. We’re talking about a real football game. This guy wins every close game he’s been in. Ever. Tony loses every close game he’s ever been in. There’s something to that.

“I’ve been having an argument out here with a few guys, mainly Colt Knost, who are Dallas Cowboys homers. They worship Tony Romo and just hate on Tim Tebow. I don’t get it. I know Tim is not a world-beater. Fine.

“When he got picked up by the Pats, I’m like, I’m getting that on my bag just to piss these guys off. That’s mainly why it’s on here.”

Every maintained that his Tebow fandom extends beyond just a connection from the same school.

“I don’t see how you can dislike a guy like him who’s brought none of this attention on himself,” he continued. “It’s not like he’s on Instagram tweeting photos of flying on private jets and stuff. This guy is as genuine as you can get.”

As for the reaction he gets from fans on the golf course, Every said, “I haven’t gotten loud reaction on the course, just people who whisper about it.”

Here in the heart of Patriots nation, the fans will be doing more than whispering – whether Tebow makes the team or not.