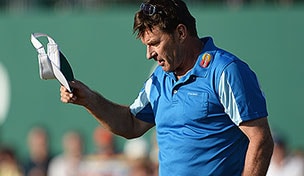 Getty Images
CHARLOTTE, NC - MAY 07: Stewart Cink wears ribbons to honor Seve Ballesteros after the news of him losing his battle with cancerous brain tumors prior to the start of the third round of the Wells Fargo Championship at the Quail Hollow Club on May 7, 2011 in Charlotte, North Carolina. (Photo by Scott Halleran/Getty Images)  -

CARY, N.C. – Nick Faldo has no expectations for his first regular Champions Tour start this weekend at the SAS Championship.

''I think that's really what I'm here to find out, how well could I play,'' Faldo said Thursday. ''I think I'm here to entertain the gallery and entertain myself.''

Faldo, a 56-year-old six-time major winner and World Golf Hall of Famer, has been in the broadcast booth since 2006. He said he decided to play a limited Champions Tour schedule when his competitive side came out at the British Open.

''But as you know, if you saw Muirfield, it was impossible,'' said Faldo, who missed the cut with rounds of 79 and 78. ''You need to be playing. Even the best players in the world were struggling.''

Faldo also played in the Champions Tour's Senior British Open in 2007 and 2009. He said he has played only 50 rounds since 2010 when the British Open was at St. Andrews. And though he wants to be competitive, he said he knows the more time he has spent broadcasting, the more his golf game has suffered. He said he has lost 7 mph in swing speed since his competitive playing days.

He admitted that he wants to play well – particularly during the final round.

''That's the biggest thrill of this game, going out there and feeling really nervous, apprehensive, everything, but you know you can go out and play your heart out, that's what you're trying to do,'' Faldo said. ''So, if we can rekindle that a bit here, it will be fun.

''I hope I can get my name on that leaderboard and see what it feels like again. That was always the thrill in my playing career.''

The field in Cary includes Colin Montgomerie, who turned 50 in June.

After playing in seven events, he said he's been impressed with the level of play on the over-50 tour. And he's happy to see Faldo in the field.

''He played at Muirfield this year at the Open; he's still exempt for that obviously, and I think he got quite competitive again, he could do something.''

Nine Hall of Famers are scheduled to tee off this weekend, including defending champion Bernhard Langer. He's second on the season-long race for the Schwab Cup, 669 points behind leader Kenny Perry, who also is in the field.

''I think it's great that Nick Faldo is playing and Colin Montgomerie,'' Langer said. ''Anybody that's a Hall of Famer and won majors, has a great career, it adds to the tournament, it helps our tour, so it's great to see these guys compete on a regular basis. It's good for the game of golf.''