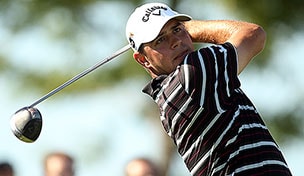 Getty Images
NORTON, MA - SEPTEMBER 03: Steve Stricker looks on from the 16th hole in the first round of the Deutsche Bank Championship at TPC Boston on September 3, 2010 in Norton, Massachusetts. (Photo by Mike Ehrmann/Getty Images)  -

Hope you enjoyed the offseason. The PGA Tour is back in action this week with the Frys.com Open, the first event in the 2013-14 season. Here are a few groups to watch at CordeValle in San Martin, Calif.:

Woodland peaked late last season with a victory in Reno, T-2 at The Barclays and two other top-25 finishes, while Horschel broke out of a late-summer slump to post consecutive top 20s in the FedEx Cup playoffs. Blixt is the defending champion here, after finishing at 16-under 268.

Leishman and Cabrera represented the International side at last week’s Presidents Cup, with each player posting a 2-2 record. Howell, meanwhile, is coming off a 2013 campaign in which he recorded five top 10s, but none since May.

Matsuyama will have major-championship company when he makes his first start as a PGA Tour member. The 21-year-old went 1-3-1 at last week’s Presidents Cup, and now he looks to pick up where he left off last year on the PGA Tour, when he had six top 25s in seven starts, including a pair of top 10s in majors.