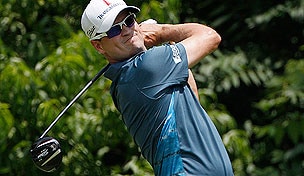 The PGA Tour heads to Las Vegas this week for the Shriners Hospitals for Children Open at TPC Summerlin. Here are a few early-round groups to watch:

Johnson is one of the hottest players in golf – no finish outside the top 30 since June, seven top-10s in his last eight starts, including a victory at the BMW Championship. He is making just his second career start at TPC Summerlin (T-10, 2008). Moore is the defending champion here; in 2012, he shot all four rounds of 68 or better and won by a stroke at 24-under 260. As for Love, he kicked off his 2013-14 campaign at the Frys.com Open, where a final-round 74 dropped him to a T-62. He has seven top-10s in 20 career starts here, though none since 2008.

Walker, last week’s winner, returns to the venue where he tied for 10th in 2012. He missed the cut in his other two starts. Watney, who resides in Las Vegas, has a strong history at TPC Summerlin, with top-10s each of the past three years, and he seems to be turning the corner with new swing coach Todd Anderson, racking up three top-15s in the FedEx Cup playoffs.

DeLaet is making his first start of the new season, after an encouraging 2013 campaign in which he recorded seven top-10s, including back-to-back top-threes in the FedEx Cup playoffs, and was one of the standouts on the International Presidents Cup team. His only start in Vegas was back in 2010, when he tied for 18th. English and Merrick are also making their first starts of 2013-14, as they look to return to form after their breakthrough victories. English, who was 60th here last year, hasn’t finished better than 14th since his win in Memphis, while Merrick has just one top 10 post-Riviera. In six tries, he has finished no better than 36th at TPC Summerlin.

Simpson begins his new campaign after a 2013 season in which he posted five top-10s, including a solo fourth at the Tour Championship. He continues to search for his first win since the 2012 U.S. Open. He is making his first start here since 2010, when he tied for fourth and shot all four rounds in the 60s. Reed was a surprise winner at the Wyndham Championship in August, but he has struggled since, with two missed cuts (including last week, at the Frys) and two finishes outside the top 50. Toms doesn’t have a great history at this event. In six starts, he has failed to finish better than 19th with two missed cuts. He had just one top-10 in 16 starts in 2013.