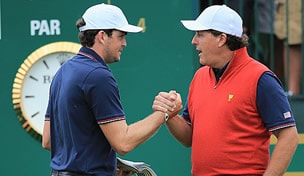 Three of the year’s four major champions are in the field this week for the final World Golf Championships event of the season, the HSBC Champions in Shanghai. Here are a few groups to watch at Sheshan International Golf Club:

Ernie failed to contend at last week’s CIMB Classic, finishing in a tie for 47th, but he has a good history at this event (twice a runner-up, including last year at Mission Hills). After a few pedestrian starts, DeLaet returned to form last week in Malaysia, where he tied for seventh. Westwood hasn’t been the same player since he squandered a chance to win his first major at the Open. In six starts since, he hasn’t finished better than 24th.

Spieth is making his first WGC start of his career, but he’s coming off a T-2 at the Tour Championship and a decent showing at the Presidents Cup. Johnson has finished in the top 15 in each of his last two worldwide starts, including a T-12 last week at the Perth International. McDowell, meanwhile, has been in a slump since the PGA. He hasn’t finished better than 47th in his last four worldwide starts as he remains No. 2 (behind Henrik Stenson) in the season-long Race to Dubai.

Poulter is the defending champion at this event, albeit at a different venue (Mission Hills). He’s coming off a T-15 at last week’s BMW Masters. Meanwhile, Stenson and Snedeker, the last two FedEx Cup champions, respectively, look to capture their third PGA Tour titles of the calendar year. Stenson, who complained of wrist and forearm pain a week ago before a T-34 at the BMW Masters, leads the Race to Dubai standings.

McIlroy is coming off his first victory of the season – well, kind of. He defeated Tiger Woods in a made-for-TV exhibition in China, but he has begun to show signs that he is emerging from a season-long slump. He was T-27 at the BMW Masters, but raved afterward about a new Nike ball and driver combination. Dufner, the PGA champ, hasn’t played since tying for ninth at the Tour Championship, while Donald currently sits at No. 61, one spot ahead of McIlroy, in the Race to Dubai and could use a good week to solidify his position. He has just one top 10 in his last six worldwide starts.

Mickelson was out of sorts all week in Malaysia, but he still managed to turn in a T-19. He won this event in 2009 and was T-2 a year ago at Mission Hills. Rose hasn’t played since a solo sixth at the Tour Championship, while Bradley was the halfway leader at last week’s CIMB Classic, only to scuffle on the weekend en route to a 10th-place finish. Perhaps being in the same group as Mickelson, his match-play partner, will help get Bradley back into the winner's circle for the first time in 15 months.