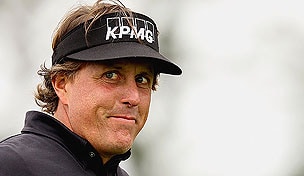 Phil Mickelson came from behind to win the AT&T Pebble Beach National Pro-Am on Sunday with a sizzling final round of 8-under 64.

Paired with Tiger Woods in the next-to-last group, Mickelson overshadowed Woods quickly - taking a six-shot advantage through the first eight holes. In the end, Mickelson bested Woods' 75 by 11 shots.

Mickelson took the lead with a 20-foot eagle putt at the sixth hole.

It was the putter that held back Woods, seeking his first PGA Tour win since the 2009 BMW Championship. A series of three-putts resulted in dropped shots or missed birdies.