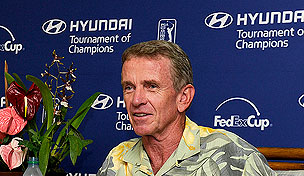 Of the 38 players who won a PGA Tour event last season, 28 made it to Kapalua for the season-opening Hyundai Tournament of Champions. After Lucas Glover injured himself while paddle boarding early in the week, the field was reduced to 27 players.

With just 71 percent of the eligible field competing in Hawaii this week – the smallest field since the event moved to the Plantation Course in 1999 – the question of improving participation was posed to commissioner Tim Finchem on Sunday.

“We are missing 10 or 11 people this year, and there's two things, really. I think one is we could ask players to stop having babies and stop falling off paddle boards and stepping on coral and falling down on snowboards and getting hurt,” Finchem joked.

Brandt Snedeker and Dustin Johnson are recuperating from surgeries. Fredrik Jacobson has a ligament problem in his thumb. Glover just got added to the disabled list.

Masters winner Charl Schwartzel is in his home country for the start of the European Tour season to defend his Joburg Open title. Rory McIlroy just took back his PGA Tour membership, and Darren Clarke isn’t a PGA Tour member. Neither is Martin Kaymer.  Phil Mickelson doesn’t play this event anymore.

Those are all of the absentees. All but one have a good reason not to be at Kapalua this week.

Not much could be done to lure a better field, though Finchem is willing to entertain ideas that could help. Maybe a different format or a later date could help, but Finchem takes a broad view of the schedule.

“It involves a number of factors with other tournaments at this time of year, and we like to make decisions not based on any one week, but what's in the best overall interest of the Tour,” he said. “So if you said, well, it's a wash, if we move X tournament, but it hurts Y tournament, we probably wouldn't want to do that.”