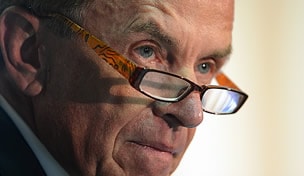 Golf’s return to the Olympics in 2016 will create a few logistical hurdles for PGA Tour officials.

That’s one reason why, more than a decade ago, the Tour originally resisted the idea of golf being an Olympic sport for the first time in more than 100 years.

“For 10 to 15 years prior,” PGA Tour commissioner Tim Finchem said Tuesday on Golf Channel’s “Morning Drive”, “we were opposed to that. It causes havoc with our schedule and makes it difficult from a player movement standpoint.”

Ultimately, he said, “the upside of growing the game globally outweighed the difficulties we had with our schedule.”

The Olympic impact is already being felt in some circles.

The PGA of America is eyeing the last week of July for the 2016 PGA at Baltusrol, with the British Open likely sliding up earlier in the month, to avoid a conflict with the Olympics in Rio de Janeiro. Official dates for those 2016 majors have yet to be announced; the Games are scheduled for Aug. 5-21.

Finchem said the Tour’s ’16 schedule wouldn’t be announced until spring 2015.

“I think it’ll work fine,” he said, “but it’s more work and it’s one of those situations where you’re not really going to know the impact until we do it.”