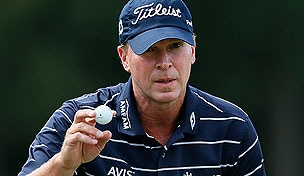 Steve Stricker and Zach Johnson both skipped this year’s playoff opener and still nearly won the FedEx Cup. In 2010, Jim Furyk was disqualified from the first event and still won the biggest prize in golf. In ’07, Tiger Woods missed the opener and won anyway.

PGA Tour commissioner Tim Finchem said Tuesday, however, that he remains unconcerned by the players who grant themselves a bye week during the playoffs. In seven years, he said, 99.2 percent of the players who are eligible to play have teed it up.

“I don’t see that developing as any kind of trend,” he said on Golf Channel’s “Morning Drive”, “because, odds are, you need the points.”

Even more players may opt to sit out next year, when all four events will be played consecutively for the first time since 2007. Forcing players to compete in all four events, Finchem said, is “kind of a negative.”

“It’s tough, competitively,” he said. “Once you get into the playoffs, one of the factors is the extent to which you can maintain and handle the pressure on your body, the week-in-week-out strain of competing at that level, knowing you have to deliver. Occasionally, you’re going to have that (players skipping), but I don’t think it’s been debilitating in the few instances that it has happened.”