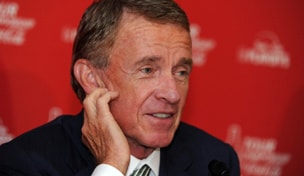 PGA Tour commissioner Tim Finchem confirmed to GolfChannel.com that the circuit will consider a player for the PGA Tour Courage Award, which took the place of the Comeback Player of the Year Award in 2012

“We will be recognizing a player,” Finchem said. “We will probably announce the winner at the Frys.com Open (Oct. 10-13).”

The Comeback Player of the Year Award has not been given since 2010, when Stuart Appleby won it, and the new trophy is geared toward a player who endured more than just a competitive slump.

The likely candidate for the inaugural Courage Award is Erik Compton, who finished 99th on the FedEx Cup point list just five years removed from his second heart transplant.