Five most interesting celebs to watch this week 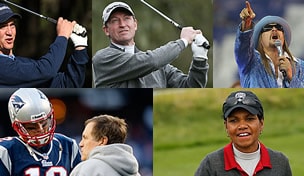 The PGA Tour returns this week to Pebble Beach, which represents the one time a year that the brightest stars from big business, politics, sports and entertainment will be humbled on national television.

There is no Bill Murray this week, so another celeb will have to hog CBS’ primetime slot. Good thing there are many suitable replacements.

Here are the five most interesting celebrities to watch on the Monterey Peninsula:

The last-minute addition to the field is just three days removed from an embarrassing loss to the Seahawks in Super Bowl XLVIII. (Just don’t mention that to him.) The 37-year-old’s 12 postseason losses are the most by any quarterback in NFL history, and in the past 10 years, only the indomitable Rex Grossman had a worse quarterback rating in the Big Game. Lauded for his mental strength and quick adjustments, Peyton will need to rely on those skills this week when a camera undoubtedly will be fixed on him for all 54, or 72, holes. If he hooks a drive, fans an approach, flubs a chip or whiffs a short putt, prepare for an onslaught of Manning Face GIFs.

It’s not just that the “Bawitdaba”, um, crooner is in this week’s event. It’s that he’s playing with John Daly, which makes him one half of the most combustible team in Pebble Beach history. GolfWRX snapped a few photos of Mr. Rock, and he has a pretty nice action. He also has a pretty unkempt goatee and ponytail, and on this particular occasion he was wearing a hat that read, in big white letters, “Made in DETROIT.” Yes, our expectations are decidedly low.

The Great One is back at Pebble and in the same group once again with Dustin Johnson, who is now his future son-in-law. (Last year, in their first official event together, Johnson missed the 54-hole cut.) DJ is a two-time winner of this event, and he also kicked away a chance to win the 2010 U.S. Open here. Surely they won’t discuss that mishap, though – not with a fall wedding on the horizon and plans to be made. They’re in the same foursome as JD and Kid Rock, so their chances are pretty much shot.

Naturally, the two Patriots are in the same group, because, well, quarterback and coach, they’re inextricably linked for eternity. Unlike in recent years, when they’ve come to Pebble straight after a deflating Super Bowl loss, they’ve had a few more weeks to digest their abbreviated playoff run and work on their games. OK, but seriously, let’s also hope they act like professionals and don’t spend all 54 holes giggling about Peyton’s Big Game clunker.

This year, the former Secretary of State trades Jason Bohn for D.A. Points, who summoned his best golf in 2011 to win the event despite having Bill Murray in his ear for four days. Last year, Rice, who became a member at Augusta National in 2012, played a casual round with Phil Mickelson at the Masters venue, and Lefty will be in her foursome this week as well, along with Exxon Mobil CEO Rex Tillerson.