Getty Images
PALM HARBOR, FL - MARCH 11: Kyle Stanley and Daniel Berger speak on the 16th hole during the second round of the Valspar Championship at Innisbrook Resort Copperhead Course on March 11, 2016 in Palm Harbor, Florida. (Photo by Sam Greenwood/Getty Images)
-

After thunderstorms rolled through Miami Thursday afternoon, first-round play was delayed for more than two hours and ultimately suspended because of darkness. Here's how things stand after the first day of the WGC-Cadillac Championship, where the leaderboard remains crowded:

What it means: The new and improved Blue Monster has grown some teeth since last year, when Tiger Woods won with a 19-under total. English is the only player among the leaders to finish the first round, and when play resumes Friday morning a total of 12 players will return to the course within one shot of the lead.

Round of the day: A winner earlier this season at Mayakoba, English began on No. 10 and made the turn in 1 over, but he caught fire on his second nine. The former Georgia standout birdied four holes on his inward half, including a 46-foot bomb on the par-3 ninth to close his round out in style.

Best of the rest: While he still has two holes to play, Dufner had one of the more adventurous opening rounds. The reigning PGA champion seemingly found a bunker on every hole at Trump National Doral, but he was able to recover from nearly every sandy situation. Dufner birdied four straight holes from Nos. 11-14 and, despite bogeys on two of his final six holes, still held a share of the lead when play was suspended.

Biggest disappointment: Four days after withdrawing from the Honda Classic with a bad back, Tiger Woods anticipated having some trouble with full-length shots. Instead, it was the putter that cost the defending champ. Woods missed several chances from close range and has yet to card a birdie on his opening round. Woods ended his day on a bad note with a three-putt bogey at No. 10 and sits at 2 over, five shots off the pace.

Main storyline heading into Friday: Many players are facing a marathon day Friday, as tournament officials look to get back on track following the rain delays encountered Thursday afternoon. Among the players to watch in the pack are Rory McIlroy, who got off to a hot start before dropping back to 1 under through 14 holes, and Scott, who sits just one shot off the pace as he looks to claim the top spot in the world rankings with a win this week. 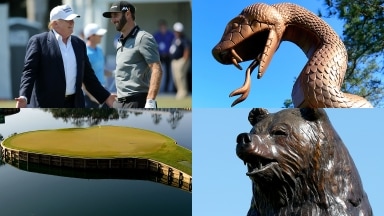 If players picked which events to play based only on the quality of golf course, the Florida swing would look vastly different. 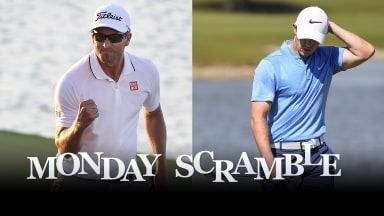 The WGC-Cadillac was Rory McIlroy's to win. But he didn't. Adam Scott did. We wrap up a crazy week at the Blue Monster. 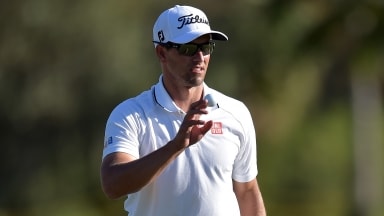 Scott up to No. 6 in world rankings after WGC win

Adam Scott jumped three spots to No. 6 in the world on the heels of his second win in as many weeks in Florida.