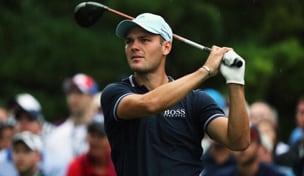 Getty Images
Sarah Lee during the final round of the Jamie Farr Owens Corning Classic at Highland Meadows Golf Club in Sylvania, Ohio, on Sunday, July 16, 2006.Photo by Steve Levin/WireImage.com  -

Already equipped with several positive memories from his time at Sheshan International Golf Club, Martin Kaymer added a few new ones Saturday while carding a course-record 62 to move into contention at the WGC-HSBC Champions.

The last time this event was played at Sheshan, Kaymer left with trophy in hand, winning by three shots over Fredrik Jacobson in 2011 for his first WGC title. The victory still serves as the German's most recent worldwide win.

After struggling with consistency this week during his first two rounds of 70 and 74, Kaymer had no such issues Saturday. The former PGA champion had a stretch of four birdies in five holes on the front nine, then followed that up with six birdies across a seven-hole stretch from Nos. 10-16. Without a single bogey on his card, Kaymer moved to 10-under for the week following his 62.

The effort was one better than the existing course record, which was held by several players – including Kaymer himself, who carded a 63 en route to victory in 2011. The mark was more recently tied by tournament leader Dustin Johnson, who fired a 63 during Friday's second round.

Once again in possession of the course record at Sheshan, Kaymer will now begin the final round tied for seventh, eight shots behind Johnson. While he may have only a remote chance of chasing down the 54-hole leader, the German appears in position to extend a streak of three straight top-15 finishes in worldwide starts, dating back to his tie for seventh at the Alfred Dunhill Links Championship in September.