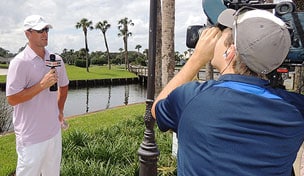 Getty Images
AUGUSTA, GA - APRIL 05: (L) Tiger Woods switches clubs with his caddie Steve Williams on the practice range during a practice round prior to the 2010 Masters Tournament at Augusta National Golf Club on April 5, 2010 in Augusta, Georgia. (Photo by Jamie Squire/Getty Images)  -

So when he stopped playing baseball a few years ago, the former standout left-handed pitcher – who plays golf from the right side – was looking for another avenue to quench his thirst for competition. The Golf Channel Am Tour fit the bill, and this week, he's playing in his second Golf Channel Am Tour National Championship tournament.

On Wednesday he fired a second round 75 on the Lagoon Course at Ponte Vedra Inn and Club, with a couple of doubles and a bogey down the stretch. Combined with his opening round 82, he finds himself in 10th place, 13 shots off the lead set by Brian Beach of Missoula, Mont., at 216 even par.

'The last five holes just killed me. I hit it way better than my score shows,' said Mulder, who shot the low round of the day in Round 2 with a 72 on the Stadium Course at the TPC Sawgrass, home of The Players Championship.

Mulder lives in Scottsdale, Ariz., these days with his wife Lindsey and three young children. He works for ESPN as an analyst, but still has plenty of time to kill, which is one of the reasons he's a regular on the Golf Channel Am Tour. This is his 12th event of the year, and he's won three times this season. So he knew he had a chance going in.

'I came here to win,' he said. 'But it's not that big of a deal, though. I'm here to enjoy myself. I've been paired with a lot of great guys every day.'

For Mulder golf has always been an escape. Growing up just outside of Chicago in South Holland, Ill., he regularly played a local course for three bucks, got a hot dog and a drink at the turn for $1.50 and afterwards called his mom to pick him up.

But since he was so good at all the other sports, golf was more for enjoyment, as it was during his playing career with the Oakland Athletics and St. Louis Cardinals.

Of course, like many great athletes, and especially pitchers, he was pretty good at golf. And when he got to the majors, he took his clubs on all the road trips. He teed it up with the likes of former Braves pitcher John Smoltz, regarded as one of the world's best celebrity golfers.

'We've played a couple of rounds together,' he said of Smoltz. 'He's gotten me by a couple of strokes each round we've played. We've been matched up in Tahoe (at the American Century Celebrity Championship) a few times, too.'

It was, in fact, an invitation three years ago from the celebrity tournament at Edgewood Lake Tahoe that spurred Mulder's interest in the Golf Channel Am Tour.

'I had never really played competitive golf before,' said Mulder, who qualified for the U.S. Mid-Amateur shortly after he started playing the Am Tour. 'So I Googled 'amateur golf,' trying to find what I could, and this popped up. A buddy of mine told me about it also and I started playing in it to kind of feel what it's like to play under the gun a little bit, and it worked out great.'

If you pin him down, he'll tell you the best course he's ever played is Cypress Point at Pebble Beach, though Augusta National, which he's played twice, is pretty special, too.

The Am Tour couldn't have a better unofficial spokesman. Mulder is impressed by the professional feel of the Tour, from the way the tee times are set up, to the scoring, to the functions that are held here at the Sawgrass Marriott Resort & Beach Club.

For the most part, he said, he's always played with great guys, but there have been times when he's been paired with someone who is a little too intense.

'It happens every now and then,' Mulder said. “You get those guys who have a little bit too much emotion that go into it. You kind of want to say, 'Hey buddy, this is for fun. We're amateurs for a reason. We're not playing for a couple hundred grand.'”

'That's why I'm here. I just enjoy competing. And that's the bottom line.'