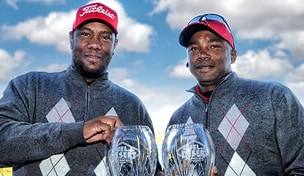 Their respective MLB careers over, it appears former pitchers Livan and Orlando “El Duque” Hernandez have been grinding hard in another sport.

This weekend, the half brothers teamed up to win their flight at the 11th annual Duel in the Desert in Las Vegas, one of the biggest events on the Golf Channel Am Tour. They shot 2-under 214 (69-71-74) to win their division by 15 strokes.

The 54-hole event was held at the Las Vegas Paiute Golf Resort. The two-man team tournament consisted of a scramble, modified alternate shot and best-ball format.