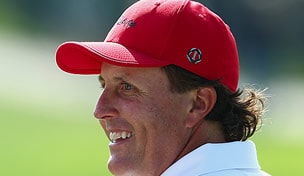 Getty Images
Derek Gillespie added his name to the list of Big Break winners. Watch the full season <a href='http://www.golfchannel.com/tv/big-break-prince-edward-island/'> HERE </a>  -

DUBLIN, Ohio – Here’s a trivia question for you: When was the last time four major champions played in the same match at a Presidents Cup?

The answer is the opening foursomes session of the 2009 edition of the event, when Jim Furyk and Justin Leonard halved with Retief Goosen and Y.E. Yang.

That will change on Thursday, when the tandem of Phil Mickelson and Keegan Bradley will tee it up against buddies Louis Oosthuizen and Charl Schwartzel.

“I think those are two very strong players,” Mickelson said. “Oosthuizen has not been healthy and able to play lately, but apparently he's 100 percent and his game looks pretty sharp. … and Schwartzel has one of the most aesthetically beautiful swings you'll ever see.

“But Keegan and I are playing well. We're ready for it and we seem to bring out the best in each other. We had some great momentum at the Ryder Cup last year. We want that to continue, and the only way to continue that is with good play and with good results, so we've got to put together our best game tomorrow, because we want to keep the momentum going. It's not going to be easy.”

For the record, the last time four major champions played together in the same Ryder Cup match was last year, when Mickelson and Bradley defeated Rory McIlroy and Graeme McDowell in a fourballs match on Friday.