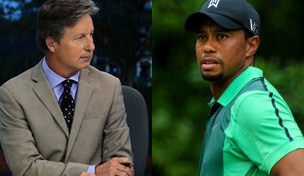 Below is the full transcript of Rich Lerner interviewing Brandel Chamblee about his article on Tiger Woods that appeared two weeks ago on Golf.com:

BRANDEL CHAMBLEE: A few things, Rich. You know, in offering my assessment of Tiger’s year and specifically looking at the incidents in Abu Dhabi, Augusta, Ponte Vedra and Chicago, I said Tiger Woods was cavalier about the rules. I should have stopped right there. In comparing those incidents to my cheating episode in the fourth grade, I went too far. Cheating involves intent. Now I, I know what my intent was on that fourth grade math test. But there's no way that I could know with one hundred percent certainty what Tiger's intent was in any of those situations. That was my mistake.

LERNER: Blunt question: Do you have a vendetta against Tiger?

CHAMBLEE: Of course not. My job as an analyst at Golf Channel requires me to analyze golf and offer my opinions. I'd like to think I'm pretty good at it. Tiger Woods is the best player in the game by miles, maybe the best player of all time. And over the years, I have said a lot of positive things about Tiger's golf swing and his accomplishments, and at times I've been critical, but that's my job. And my obligation to the viewer to not only talk about when Tiger plays well, but when he doesn't play well and put it into perspective, as well as every other player. Now at times, I can be a bit forceful with my opinions, and some would say too forceful too many times. Fair enough. And that was obviously the case in this instance. So much so that even my son chimed in on this issue.

LERNER: Your son – what did he have to say about all of it?

CHAMBLEE: Well I have a 45 minute drive to and from the school every day. So we've had a lot of time to talk about this as he and his buddies have read almost all of this online. And at one point in one of those drives he looked at me and he said, 'Dad, if you'd been more diplomatic in what you wrote, perhaps people would be talking more about the issue than your assessment.' He's a smart kid. And it wasn't until after he said that that I offered my apology on Twitter. Maybe I should have let my son read this column before I hit send on the email.

LERNER: What's next in all of this?

CHAMBLEE: Tiger and his camp, they're upset at Golf Channel; they specifically called Golf Channel out.  And to me they're barking up the wrong tree. This column appeared on Golf.com, nobody here at Golf Channel knew anything about it and my editor at Golf.com asked me to rewrite the ending when I sent it in to him. I wished I would have listened to him. But all of this has made me realize that there is a conflict and a confusion when you work for one company and write for another company. So going forward, I'm not going to be writing for Golf Magazine beginning next year. I'll be writing  exclusively for GolfChannel.com, (NBCSports.com). And you know, that way if Tiger and his camp have an issue with something I write, they will at least be yelling at the right people.