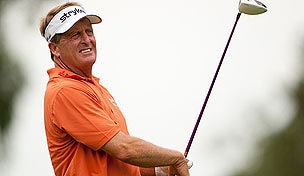 Getty Images
THE WOODLANDS, TX - MAY 6: Fred Funk watches his tee shot at the second hole during at the final round of the the Insperity Championship at The Woodlands Country Club on May 6, 2012 in The Woodlands, Texas. (Photo by Darren Carroll/Getty Images)  -

Taylor Funk, the son of eight-time PGA Tour winner Fred Funk, has signed a National Letter of Intent to play college golf at the University of Texas, the school announced Wednesday.

Funk, of Ponte Vedra Beach, Fla., is one of the nation’s top-ranked junior players. He is expected to enroll at Texas in January and could play for the Longhorns, ranked No. 17 by Golfstat, in the spring.

Jordan Spieth was part of the team that helped Texas win the NCAA Championship in 2012. This year, the Longhorns have prized prospects Beau Hossler and Gavin Hall on the roster, and Scottie Scheffler, the 2013 U.S. Junior Amateur champion, has given a verbal commitment to the school.