G-Mac on Rory's form: 'Ominous for the rest of us' 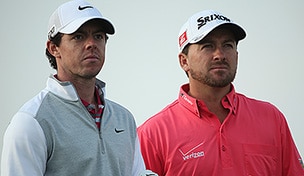 Getty Images
Annika Sorenstam of Sweden poses after being awarded The Golf Writers Trophy for golfer of the year, during the Pro-am of the Weetabix Womens British Open at the Royal Lytham & St Annes Golf Club, on August 2, 2006 in Lytham, England. (Photo by Warren Little/Getty Images)  -

Rory McIlroy and Graeme McDowell gave no indications Thursday that their relationship – lately the source of much speculation – was at all strained.

In fact, G-Mac gushed after the first round of the BMW Masters that McIlroy, who shot 71, was nearing vintage form, telling the Daily Mail: “His score might not have reflected it, but that was like watching Rory in 2011 and 2012. His driving was fantastic, and it’s looking really ominous for the rest of us.”

That’s a markedly different tone than what McDowell had Wednesday, when he was asked about the former world No. 1.

“I don’t have any comment,” he told the Herald Sun (Australia). “It’s been a long complicated year for everyone (talking about the slump), so I prefer not to talk about Rory McIlroy in this conversation.”

McIlroy, of course, is currently embroiled in a legal battle with his former management company, Horizon Sports, which still represents McDowell. McIlroy also was absent from G-Mac’s wedding in the Bahamas as he met with his lawyers and filmed a commercial for Nike.

Though McIlroy is winless in 2013, he finished in a tie for second at last week’s OneAsia Tour, his best result since early April. On Thursday, he shot 1 under in windy conditions and is in a tie for 11th, six shots behind. McIlroy attributed his improved driving to finding a new ball-and-driver combination with Nike.

“This is the best I have felt all year and it’s all starting to come together now,” he said, according to the Daily Mail. “I felt I played better than a 71, but it’s not a bad score given the tough conditions.”