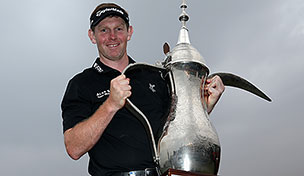 It wasn’t quite the dramatic finish we anticipated at the Omega Dubai Desert Classic, what with Tiger Woods and Rory McIlroy headlining the field. Here’s the skinny on the final round at Emirates Golf Club:

What it means: Leading by two, Gallacher defended his title with a hard-fought 72 on Sunday, a round that paled in comparison to his scorching back-nine 28 a day earlier. After going out in 39, Gallacher came home with four birdies to pull one shot clear. The victory, the third of his European Tour career, should vault the 39-year-old inside the top 40 in the world rankings. He also became just the third player (Ernie Els, Woods) to win multiple times in Dubai.

Round of the day: The low score of the day belonged to Mikko Ilonen, who made two eagles and birdied the last two holes for an 8-under 64. The low round rocketed him inside the top 5.

Best of the rest: Grillo, a 21-year-old Argentinian, eagled the last hole for a bogey-free 66 to finish solo second. It was the best career finish for a player who entered this week ranked No. 268 in the world. Wattel, a 23-year-old Frenchman, was equally impressive, shooting 66 to vault up the leaderboard (T-3).

Biggest disappointment: This distinction goes to the event’s two biggest stars, McIlroy and Woods. Entering the day only two behind, McIlroy made only two birdies during a closing 74 that dropped him all the way to joint ninth. As for Woods, he was never a factor all week, needing to make three late birdies just to shoot a final-round 71 and finish T-41. The T80-T41 start to his 2014 marks his worst-ever start to a season.