Gallacher not overwhelmed by marquee grouping 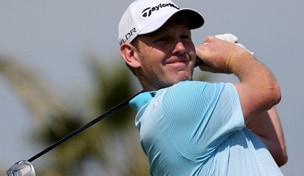 DUBAI, United Arab Emirates – The metaphorical third wheel in Thursday’s marquee grouping at the Dubai Desert Classic is probably more familiar to Tiger Woods than most golf fans in the United States.

Stephen Gallacher, the defending champion this week at Dubai, will be paired with Woods and Rory McIlroy on Thursday and Friday but he didn’t sound like a man who will be overwhelmed playing alongside golf’s power twosome.

Gallacher played Woods in a team match during the 1995 Walker Cup and the two were paired together on Tuesday during the Champions Challenge at Emirates Golf Club.

“We talked about some of the guys on his team and guys that were on my team that are still playing,” Gallacher said of Tuesday’s round.

Nor does it seem likely that Gallacher, a two-time winner on the European Tour, will be intimidated by Woods or McIlroy.

“You want to be playing sort of the top guys,” Gallacher said. “They’re there for a reason, so if there’s anything that you can pick up on or just watch how they play their game and see if their game is close to yours. That can give you a bit of a boost.”