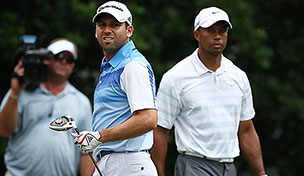 Getty Images
Brandt Snedeker during the first round of the 2005 U.S. Open Golf Championship at Pinehurst Resort course 2 in Pinehurst, North Carolina on June 16, 2005.Photo by Sam Greenwood/WireImage.com  -

Six months later, Sergio Garcia is still contrite when discussing one of the year’s biggest melodramas.

In a sit-down interview with CNN’s Shane O’Donoghue, Garcia said that the fried-chicken jab at Tiger Woods was “horrible” and “not a good feeling,” but added that he has learned from the experience and become a better person.

When asked the moment he realized that the story was becoming worldwide news, Garcia said, “I didn’t mean it in a bad way. When I was driving back to the hotel, I started thinking about it. Obviously, I didn’t expect that question at all, so you try to be funny and it comes out the wrong way, I guess.”

Of the turbulent aftermath, which included a few public apologies and a note in Woods’ locker at Merion, Garcia told CNN, “It was horrible; it’s not a good feeling. But what’s done is done. Everybody knows how I feel about it, so I think they should be fine with it and if not, it’s kind of their problem. It’s not my problem.

“The most important thing is learning from all those things. I’m making sure that all those experiences make you stronger, a better person and things like that. I think that I’ve learned from those things and I just need to keep getting better at it, and hopefully keep making people happy.”

Since the Players, Garcia hasn’t finished better than fourth in 13 worldwide starts.