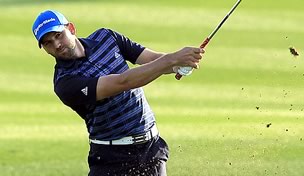 Sergio Garcia is searching for his third win in two months, trailing Peter Hanson by three after shooting 5-under 67 the opening round of the Dubai World Championship.

By his estimation, Garcia left several shots out on the course. A double-bogey at the par-3 17th and several missed putts on the front side had him thinking he should be the leader.

'Obviously all of the putts I made on the back nine, I missed on the front. I had probably about three or four good chances on the front that I missed,' he said. 'But then I got going nicely on the back nine, and unfortunately just a combination of a little bit of a slip with the left foot on 17 and a bad swing, and it ended up being actually a pretty good double-bogey.'

The Spaniard won twice in his home country in October to end a two-year drought. Those victories, however, came on his boyhood course and at legendary Valderrama. Garcia does not view Jumeriah Golf Estates' Earth course with the same affection.

'Well, I'm not going to lie to you, it's not one of my favorites, that's for sure,' he said. 'But it's always in good shape, so that makes it fun playing it, and we usually get great weather, so you know, it's a fun event.'

Garcia is now No. 17 in the Official World Golf Ranking after falling to a low of 82nd in March.